This project began when I started mudlarking on the Thames foreshore at Deptford. Rather than coins and pipes, my treasured finds were shards of blue and white ceramic that were mostly Willow Pattern.

I grew up with the Willow Pattern plate and my mother used to tell the romantic but tragic 'story' that is depicted in the design. Research on how these fragments had been turning up on the foreshore for over 200 years fuelled a six-year fascination. Some of this journey is recorded in a blog called The Willow Pattern Project which has over 170 posts up till 2014. Text and notes provide further clues.

Hyacintho sinensis, Camelia shardiensis and Salix crockiana have become established and naturalised at Creekside Discovery Centre, where they grow happily amongst an exotic mix of native plants and other wildflowers that have made their way here from all over the world.

This installation of ceramic 'flowers' marked a return to Creekside Discovery Centre from which another project about wild flowers had emerged in 2009 (see Tagworts). It also responded to the brief from Deptford X 2012 lead artists-curators Hew Locke & Indra Khanna:

"Surrender to the pleasure of the decorative. Revel in the excessive, embrace it and be dazzled.

"A stall stacked with lurid artificial flowers, rhythmic serpentine graffiti, baroque mermen carved over the old town hall door: all are equally a joy to the eye. Indulge yourself.

"But there is more than just the surface. Layers of decoration contain levels of meaning, messages and codes. Symbols of power, conspicuous consumption, signals of elitist knowledge, patterns of control and signs of social belonging."

The piece was installed again in 2013, in the garden of the historic The Master Shipwrights' House, Deptford, during Open House London. 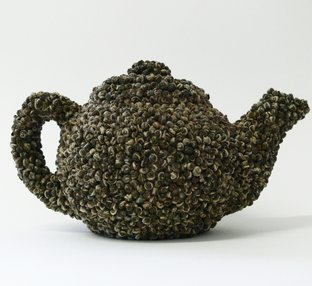 Creekery #2 followed on from Creekery #1 (2010), which was accompanied by the following text:

"An English interpretation of the Chinese handpainted porcelain brought to British shores by tea traders and privateers, The East India Company...A pattern developed in 1790 at the start of the Industrial Revolution...A design that traversed the world with the English colonialists and is still in production today...

The Creek – home to Deptford’s industrial past, and a habitat for invasive species like the Chinese mitten crab (brought back in ships’ ballast from the far east) and the Buddleia (from the mountains of China)...

The viewer surveys the spectacle from an elevated position, echoing the unusual perspective in the pattern...

The Ravensbourne, a wild river flowing into The Thames, full of flotsam and jetsam…a predominance of broken decorated blue and white ceramic washed up on the Thames foreshore, abundant due to its popularity at a time when everyone discarded their rubbish into the river...This new Willow might eventually become battered fragments to be discovered by future beachcombers...

Like the invasive species in the Creek, the artist’s intervention is a form of colonisation. The movement of the tides reflects the economic ebb and flow of trade as businesses return to China for cheaper manufacturing, as they did with the first porcelain plate. And like China herself, much is hidden, to occasionally surface."

“The Thames...can be considered to be a museum, containing a collection of material finding its way into the river, where it is sorted and classified according to the river’s own internal physical dynamics, those of transport and deposition, tide, current and flow.” 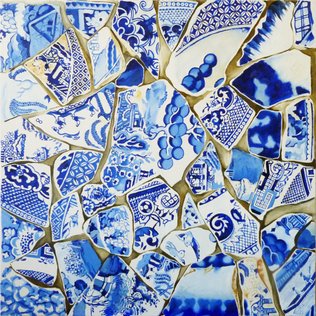 Two Tides was filmed over two days at Harold Wharf during Creekside Open, and shown at Twentieth, a group show of past and present APT studio members at APT Gallery, Sept/Oct 2015.

The first installation of Creekery was viewed from the Ha'Penny Hatch footbridge. Over 200 pieces of modern Willow-ware (microwave and dishwasher safe) were deposited in the Creek, with access gained from Creekside Discovery Centre.

Creekery #1 was accompanied by a text piece installed on the railings of the central 'look out' area of the Ha'Penny Hatch footbridge.

The text is a nursery rhyme invented by English pottery manufacturers to sell their wares and marks one of the first ever advertising jingles in the time of industrial 'revolution'.

A little house with open door,

Apple tree with apples on,

A crooked fence to end my song.

Postcards from China and Stoke 2010

Elsewhere, Made In Greenwich Gallery 2013

Oil on canvas, each canvas 18cmx13cm 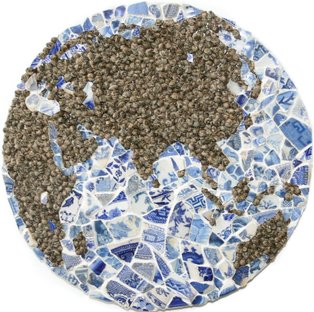 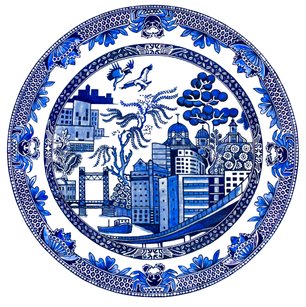 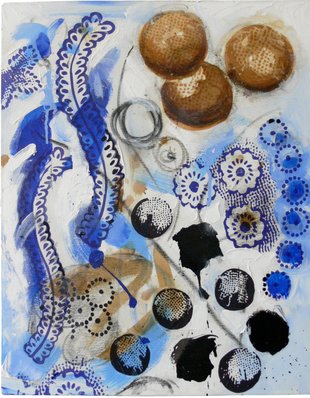 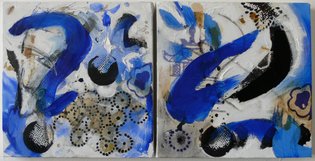 Shards of 18th and 19th century blue and white ceramic, found on the beach at Deptford, Greenwich, the South Bank and Kent, are assembled in the shape of the Eastern hemisphere on a 10ft circle of gravel.

This ‘world in pieces’ recalls the historical roots of blue and white earthenware, the passion for all things oriental, and the trade in tea and porcelain that led to England becoming the stronghold of one of the first mass-marketed products of the Industrial Revolution — blue and white transfer printed pottery.

Manufactured in its millions, it was intrinsically interwoven with the growth and popularity of tea — a once sacred Chinese beverage reduced to a mere commodity in a traumatic encounter between East and West.

A partly buried upturned shopping trolley disgorges its cargo like a shipwreck. The East India Company, who repaired its ships at Deptford, had free rein to use military force to establish monopolies in the trading of tea, silk and porcelain, wielding more power than any other commercial organisation in history. The Company's strategy for trade in China involved smuggling opium to pay for tea, a policy of state sanctioned drug running that created millions of Chinese addicts.

Initial research revealed there were as many differing and embellished versions of the 'story' as there are different designs of the plate manufactured by the various English potteries.

The story briefly: a mandarin's daughter flees an arranged marriage to a wealthy suitor with her father's young accountant. They are chased by the mandarin's henchmen, who eventually catch up and kill them. The gods take pity and turn them into doves.

I found these fragmentary and different narratives complemented the broken ceramic I collected from the Thames foreshore, which led to cutting up the words and narrative from different sources. 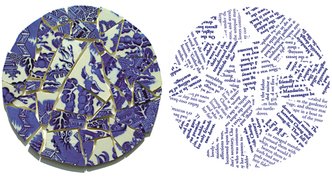 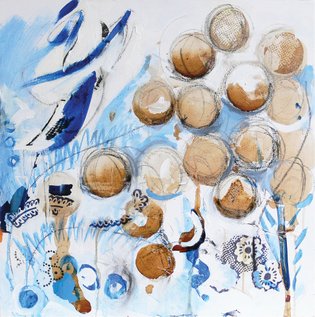 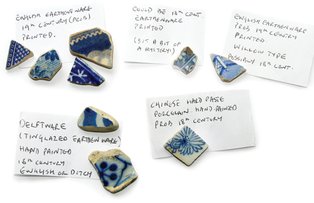 Photography by Sue Lawes except where credited.