GIVE US BACK OUR BLOOMIN' ANCHOR

Give Us Back Our Bloomin' Anchor

Give Us Back Our Bloomin' Anchor Procession

In 2013, Deptford Is Forever emerged as a collaborative work with performance artist and musician David Aylward, when the Deptford Anchor – a public landmark and the only visible sign of Deptford’s rich maritime heritage – was removed from Deptford High Street as part of Council regeneration works.

To harness the resulting public outcry and mobilise for the anchor’s reinstatement, I created two images which appropriated the visual language of the sailor’s tattoo and used them to ‘brand’ the curation of various interventions in the high street. We aimed to 'spread the word'.

5,000 white paper bags were printed with the “Give Us Back Our Bloomin’ Anchor” design; the bags combined the mariner’s means of self expression (the markings of his life experience) with a ‘call to action’ (as opposed to mere advertisement or decoration). Employing the Situationists’ counter-technique of détournement, we distributed them free to all the independent shop keepers and market traders to use for their customer’s purchases, planting the message firmly within the realm of ordinary consumption and commodity.

Further ‘branding’ took place when I offered free ‘anchor tattoos’ (for one day only) at the local tattoo studio Kids Love Ink. The event was over-subscribed with people wanting to be permanently marked with one of three anchor motifs.

I also commissioned an anchor-shaped white floral wreath which was displayed in the makers’ shop window and used in a street procession organised by David Aylward in which Laura X Carlé’s giant cardboard anchor was carried from the riverside through the high street on a market day to stand temporarily on the site of the original anchor. 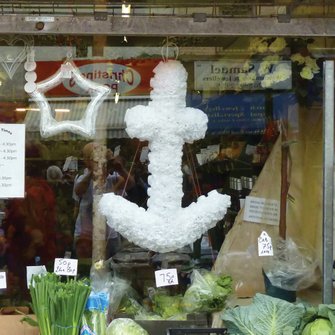 I designed a website to document the work, further raise consciousness and connect the anchor with Deptford's rich naval heritage. Deptford Is Forever were also involved in the local community’s fight to save the historic Deptford Royal Dockyard (aka Convoys Wharf) from a 3,500 luxury flat development by a Hong Kong conglomerate, Hutchison Whampoa.

Deptford Is Forever were founding members of The Lenox Project CIC, which in 2014, as part of planning conditions when the then Mayor of London Boris Johnson granted planning permission to the developer, was given the go ahead to build a replica 17th century naval ship on the massive dockyard site.

In 2020, the landowners have built nothing and The Lenox Project, now a registered charity, still has no access to the redevelopment site. 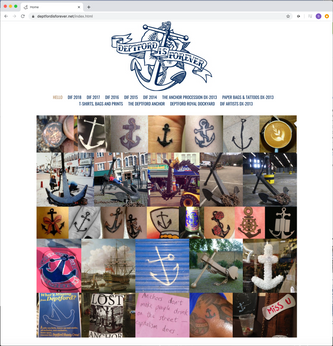 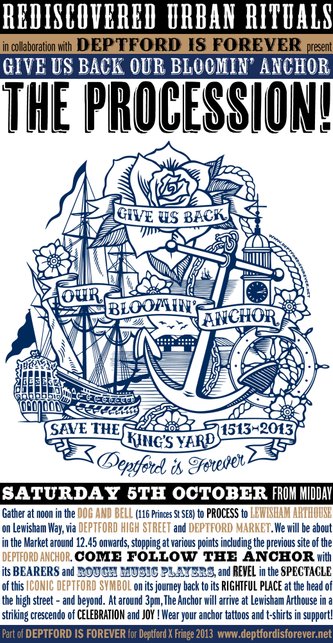 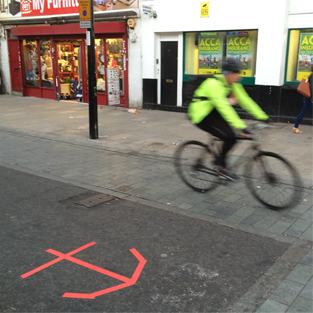 In 2015, we worked with high street conservation group The Deptford Society to launch a petition, both online and as hard copy. Addressed to the Mayor of Lewisham it demanded the return of the anchor and attracted local press interest.

Meanwhile, frustrated by the bureaucracy and sea of ‘red tape’ encountered when we tried to obtain meantime use of an empty council-owned shop to exhibit during Deptford X 2015 (the theme of which was 'Deptford Conversations'), we used red tape to draw our message on empty shop fronts, street furniture, the road and pavements.

These actions provoked conversations with the public which were filmed and edited. 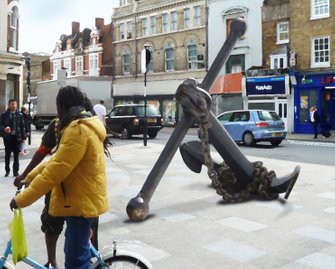 As the petition grew, it provoked some heart-felt comments from the signatories. In 2016, I used these comments to publicise the petition still further in posters which we plastered all over the high street. David took to chalking the anchor on the pavements on busy market days which I filmed and documented.

By the end of 2016, the petition had 4,000 signatures which meant it could no longer be ignored by the Council. Much of 2017 was spent chalking more anchors and arguing with them, as they had commissioned a feasibility study to find the best place to re-install the anchor, details of which are documented on the Deptford Is Forever website.

The study found many reasons not to return the artefact to its rightful place, but eventually we were promised that it would be returned in early 2018 to our preferred position – more or less where it had previously stood.

Give us back our bloomin' anchor poster campaign

A4 posters with petitioners' online comments

Though still working with a familiar object as I did with the The Willow Pattern Project, my collaboration with performance artist David Aylward involved different methodologies with motives aimed at a resolute rather than open-ended outcome.

Deptford Is Forever went on to creatively contribute to the Tidemill campaign – a far more serious battle that was fated to be lost before it began, so powerful were the actors and financial interests involved, along with the lies and propaganda they continue to propagate.

The anchor has universal, mythical and symbolic properties with all sorts of meanings for everyone, and by repurposing it and raising awareness of its significance in the town’s forgotten heritage, private and collective emotion, memories and feelings of love and loss, as well as a strong sense of civic pride, were evoked. The anchor is now unequivocally the de facto emblem for Deptford.

Deptford Is Forever could be situated in ‘relational aesthetics’ since we facilitated the exchange of information to give people the power to change something. Partly it resided in critiquing and addressing the consumer’s relationship to commercial branding – in this case transposed to the public realm.

But the work might also be placed in a discourse on regeneration that many are now more familiar with – namely, artists’ unwitting role as compradors in gentrification, placemaking and developers’ ‘destination strategies’.

Colourful displays of independence and rebellion are all fodder for the developer and local authority alike, parasitical on the 'spirit' of a community that in reality they continue to ignore.

In February 2018, the anchor was returned (see Deptford Is Forever website) and the project and its supporters celebrated with an exhibition, more pavement chalking and another high street procession.

Photography by Sue Lawes except where credited.